My kingdom for a horse: An Incomplete History of the Shaving Horse

I have a pile of oak staves waiting to be turned into something useful, a razor-sharp draw knife in my hand and a far away look in my eye. Like almost all of my best hand tools, the knife was left to me by my grandpa, who taught me an enormous amount about how to make wood do what I want it to.

I was always a little afraid of the draw knife.  In no small part, this was because the way my dad and grandpa used it seemed weird and unsafe. In fact, I said so once and got in trouble for my cheek.  Grandpa and dad tended to brace the piece of wood they were shaving between their stomachs and a table and scrape away.

They never cut themselves. Never even came close as far as I know. This might've been because they wore heavy jackets, but it was probably a combination of the way you hold a drawknife and the breadth of the blade, they might not even have been in any danger of doing so, but it still seems to me to be an unnecessary risk.

When I inherited grandpa's drawknife, it was put away until I built a proper shaving horse.  Because though dad and grandpa lived charmed lives (at least where draw knives are concerned) I do not. I'm clumsy and need to stack the odds in my favor.

What? You thought this would be a history of the shaving horse rather than a history of why I think I need one?

Fine, be that way.

The picture above is the stereotypical shaving horse from a 19th century book of trades.

The shaving horse is a key element of the cooper's art and mystery. It is, in effect, a foot-powered vice designed to hold wooden slats as they are shaped. The user straddles what amounts to a modified sawhorse with their feet on the pegs at the bottom of a timber that is hinged where it passes through the top of the horse.

By pushing away with your feet you apply pressure to the top of a slanted portion of the horse, pinching your workpiece in place.

Here's a picture and you should go back and watch the video of the cooper at Colonial Williamsburg that I posted last week to see it in action.

So much safer than holding the stave against your tummy.  Don't worry, mom, I'll be wearing a leather apron anyway.


Is it period-appropriate for a 16th century cooper?

I was a bit surprised to discover that this is a controversial question in certain circles.

A rudimentary shaving horse is depicted in use in the 1556 book De Re Metallica. For the record, it's shown being utilized by a miner to make bertte, a wood billet with shavings left attached to be used as fire-starters. In the case of the miners in the etching, to light fires in a mine to fracture rock.

The bertte maker is the image of a shaving horse most bandied about in these discussions online. And I thought it might be the only one in existance until I paged through the Mendel Hausbuch and noticed that half the coopers in the book are using a shaving horse of some sort.

So there's a cooper at work, his tools in the background, including a shaving horse. Case closed as far as I'm concerned. More pictures of the same foot vice here and here. Since the monk in the second image is using his as a sort of ersatz workbench, you can see the whole thing in profile, including the arrangement of the foot pedal and vice dog. 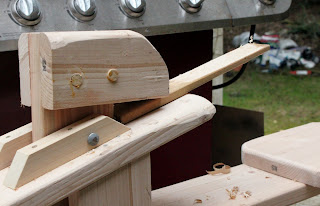 It's worth nothing that none of the shaving horses I've found have the angled surface that mine (and every other shaving horse I've ever seen) has. That slanted piece makes shaving with knife or spokeshave easier, but would preclude using the horse as a work surface as that second monk was doing. 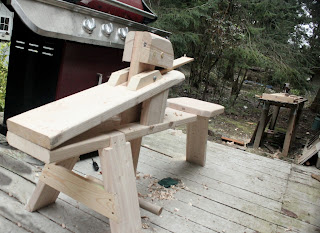 It might be a later addition to the design; I'm not sure and don't have any data one way or the other on that topic. Mine has the slanted second level and I'm not planning to remove it so we'll make a note of it and move on.

I was flipping through NetFlix videos and found an episode of Dirty Jobs where he learned to make a wine barrel. Hilarity ensues...
http://videos.howstuffworks.com/discovery/27751-dirty-jobs-building-a-barrel-video.htm

Posted by Eternal Apprentice at 10:25 AM

Our Mission, Should We Choose to Accept It

"I invite you to please join me as I take you with me back to school in a possibly impossible attempt to become a real renaissance man. Not Davinci or a Michelangelo, but 'Bill, the man who fixes the roof when it rains' circa 1560. Because I think we forget that the renaissance wasn't just artists and soldiers and kings and popes, but a groundswell of normal, ordinary people advancing their lot generation by generation, building themselves up through the sweat of their own brows and the callouses of their own hands and, for better or worse, creating the modern world."

Celebrating the Rest of the Renaissance 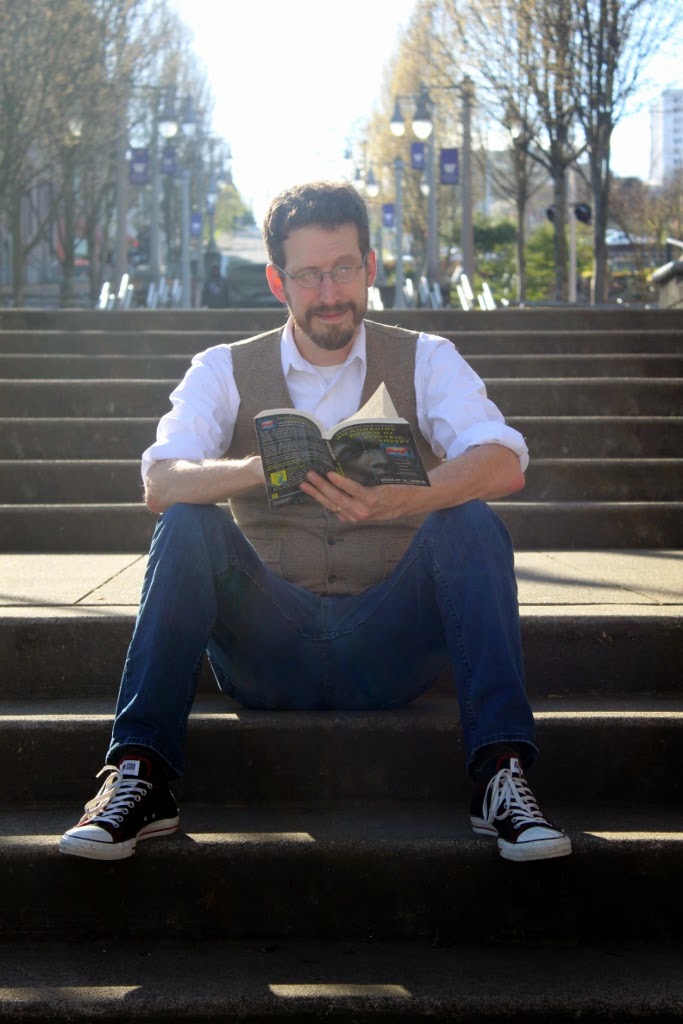 Scott W. Perkins is a writer from Washington State. He is best known in the reenactment community for his "Garb for Guys" costuming blog. In his so-called real life, he runs a writing & tutoring center for a local college and is a graphic designer. His first novel "Howard Carter Saves the World" comes out April 14th. Click the picture above to learn more.